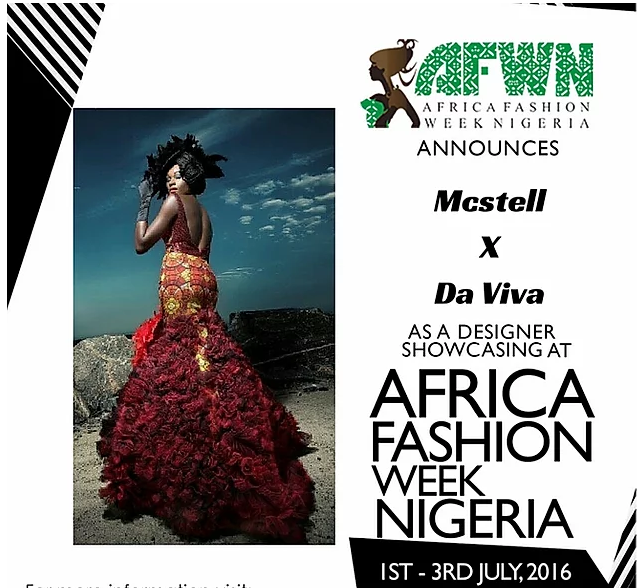 MEET MCSTELL our brand ambassador at AFWN 2016 (proudly sponsored by Da Viva) with his collection made with Da Viva fabrics. ‪#‎AFWNxDaviva‬

MCSTELL is a haute couture brand based in Lagos Nigeria whose primary aim is to boost and brand individual image through clothing. The brand has evolved from its inception in December 2014 through innovative ideas and creativity and has gathered notable awards and recognition amongst which are: May 2015, Fashion and Style Award for Best Emerging Designer, African Fashion Week Nigeria (AFWN) .
June 2015, Runway FADAN Emerging Designer of the year and Best young designer of the year, respectively.
December 2014, Daviva Brand Ambassador till date.

Okpa, McCoy Agada was born in Ikoyi, Lagos State,hails from Ijiman-Afaben Mkpani,Yakurr Local Government Area of Cross River State, Nigeria. He holds a second Class Upper Degree in Fine Arts and Design from the prestigious University of Port Harcourt,where he graduated tops in his class and therefore earned the Chief Jubilee Owei Award for best graduating student. He has always followed his passions from childhood, which are all Art oriented, so after his degree, to further harness his talents in acting and Fashion, he studied at; Royal Arts Academy (Acting major) and Zaris Fashion and Style Academy ( Pattern drafting and Fashion illustration major) respectively. He is the creative Director of the fashion brand “McStell”, which is basically a haute couture brand based in Lagos Nigeria whose primary aim is to boost and brand individual image through clothing. In May 2015, he won Fashion and Style Award for Best Emerging Designer at the African Fashion Week Nigeria (AFWN) and also bagged double honours in June 2015 at the Runway FADAN, organised by the Fashion Designers Association of Nigeria ( FADAN). He is also Daviva brand ambassador.

Follow Us
Follow us on social media to stay on track with the latest news.
Visit our online shop